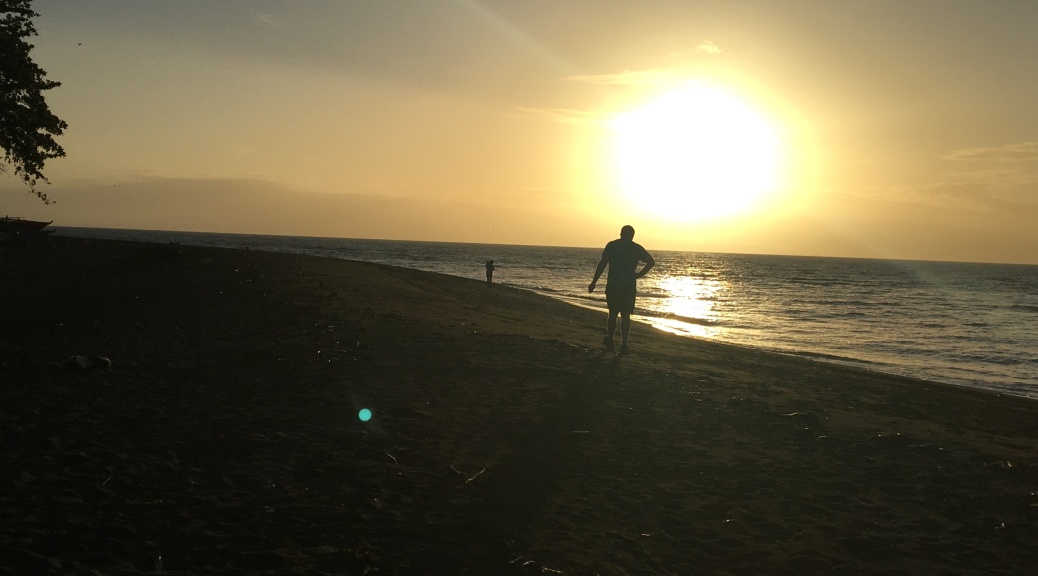 Oh, I’ll miss this! 5:30am Coffee.  Watch the sunrise. Then we would head out for a morning run before the first dive.  I found some good friends there – Amanda and Jake – to share the sunrises and to sweat with up stairs, on the rooftops, up mountains and on the beach.

We did 3-5 dives a day for 10 days down to 98′ in Puerto Galera and Dumaguete. There appears to be a lack of science behind exercising before diving.  After diving, some data shows that if you do intense exercise, you increase risk of microbubbles in your bloodstream which put you at risk for decompression sickness (DCS).  DAN recommends not exercising 24 hours before and after diving to reduce the residual nitrogen in tissues and blood.  Normal air is 21% O2, 78% Nitrogen.  Every 33′ in depth, the pressure due to nitrogen increases by 11.6 psi causing more of it to dissolve into tissues.  Affects of this can be mitigated by:

Think of what happens when you open a soda can, which releases pressure.  This effect is similar as to what causes DCS when you don’t moderate the release of pressure.

We chose to ignore the before and did around 45″ of pre-dive crossfit/running daily and didn’t suffer any affects.  Add that to the scientific data!

I also think its BS when people say diving burns 400-700 cal/hr.  People may be tired from the sun, exposure to cool water, but it is not due to exertion.

We were just three crazies running with the hounds on the white sands. 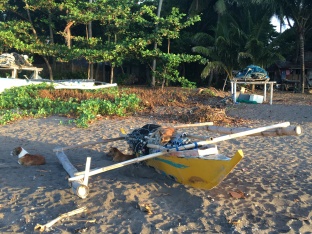 In Puerto Galera, we did a stair circuit including rooftop pushups, burpees, air squats and jumping lunges.  What a beautiful view from the roof!

There was also a 3 mile loop up the mountain (320′ elevation) behind us with amazing views up top, a run through town, and a run along the beach at the end: 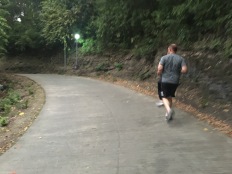 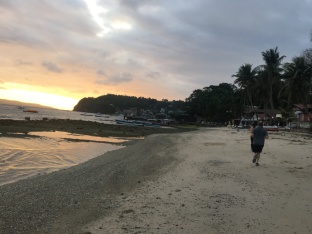 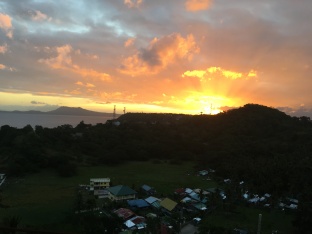 The diving itself was amazing; 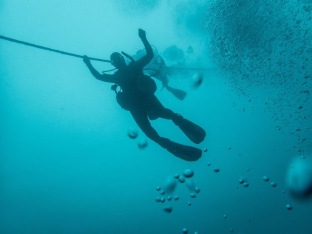 When we were in Dumaguete, we spent one day running partially up a mountain next to farms with chicken and oxen, passing families on motorinos…

Then decided beach runs were more fun and more scenic!  Had one day doing short runs incorporated into 4 rounds of a crossfit workout involving pushups, air squats, planks, burpees and others with just a long run or a run made up of sprints: 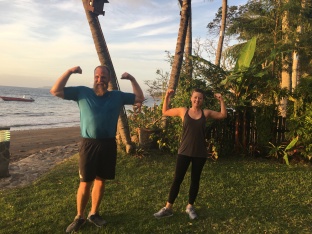 Never got tired of that sunrise…

I did lose 1.5 days in bed due to what I think was sickness/nausea due to the water 🙂  It has been a struggle this year emotionally – perhaps because of the upcoming shoulder surgery, or long nights, or ?  This was a great trip also because we just exercised for fun.  I did a long run day we flew out, missed it next weekend just because there wasn’t time, and did a 1:50 run day after we returned so got them all in per training plans.

Who wants to be average?!